"Beyond the Belt" with Jay Myers, Myers Farms 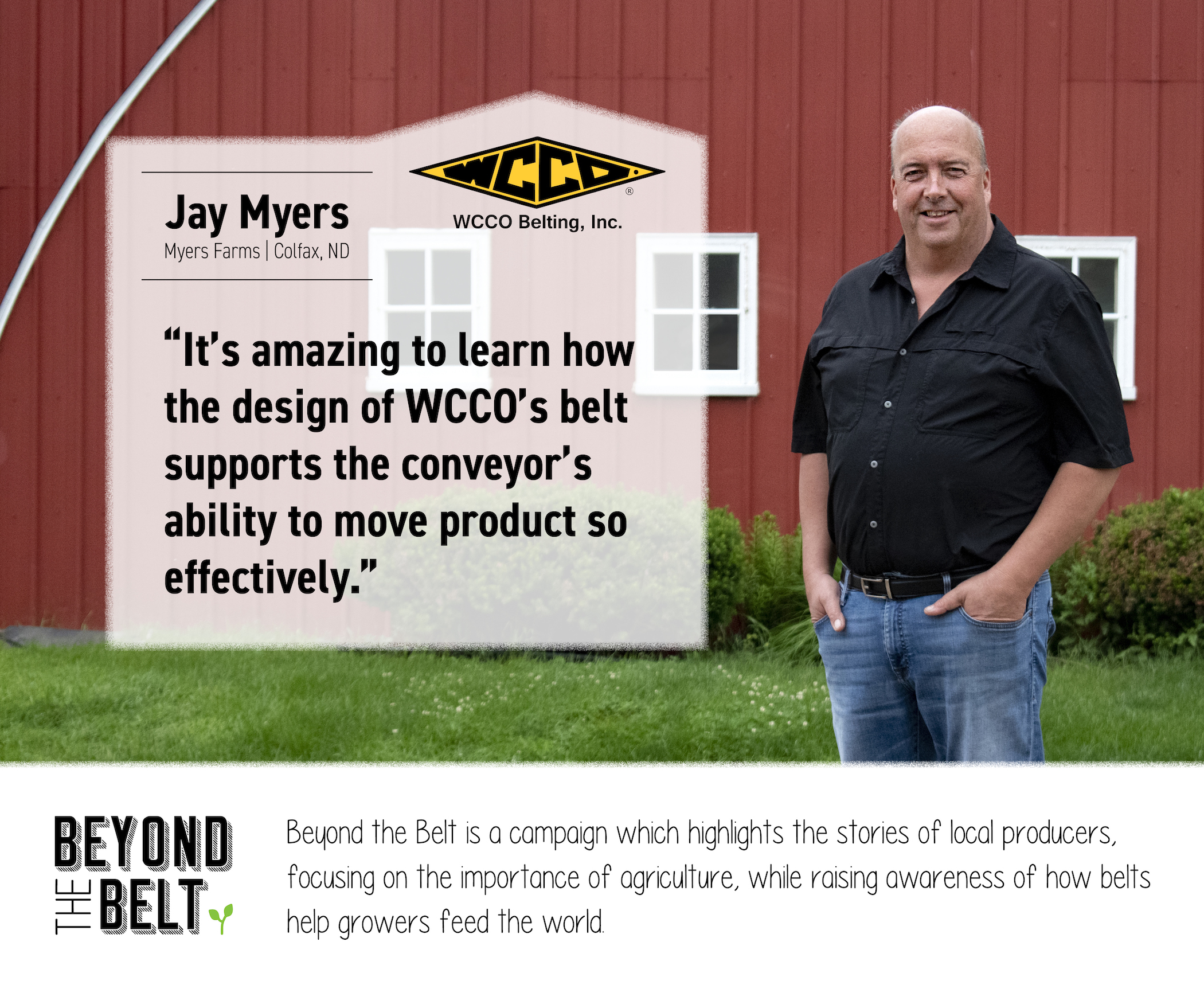 Myers Farms is a fifth-generation corn and soybean operation located outside of Colfax, North Dakota, which is about twenty miles away from WCCO Belting’s manufacturing facility in the city of Wahpeton. Jay Myers, his son, Travis, and wife, Cara, manage the entire operation. Abby Myers, Jay and Cara’s daughter, was also an intern for the WCCO Belting marketing team this summer while on break from the University of North Dakota.

Since 1986, Jay has been steadfast in his dedication to the success of his own business while also continuously pursuing his love for the agricultural industry in many other forms. Along with operating the farm, Jay and Cara manage a fertilizer and ag equipment business, AgroValley Solutions.  In addition to operating his farm and AgroValley Solutions, Jay has been a volunteer board member for the United Soybean Board (USB) since 2011. The USB is a group of farmer-directors that oversee the investments of the soy checkoff to maximize profit opportunities for all U.S. soybean farmers. Busy is an understatement for the Myers Farms’ operation, and we were grateful when the family agreed to have a few WCCO team members out for a visit and a tour.

The entire family greeted us when we arrived, including the family’s dog, Max. It was clear from the beginning of our discussion, that they rely on working as a team to get things done. The family values efficiency, and Jay explained how their operation depends on a variety of purpose-built belts to speed up their processes and improve productivity.

“No more hauling around bags of seed. We use belts to load the planter faster and easier.” Having visited WCCO Belting’s facility as a United Soybean Board member, Jay is more aware of the science and technology that goes into manufacturing rubber products. “It’s amazing to learn how the design of WCCO’s belt supports the conveyor’s ability to move product so effectively. We timed it ourselves because capacity is important to us, and the belt moves about 10,000 bushels per hour.”

Jay harvests soybeans with a draper platform fitted with WCCO Belting’s RAPTOR® drapers – the global gold standard draper belting. After switching from augers about ten years ago, he told the WCCO team he’s been more satisfied with the efficiency and performance of his harvesting process. “WCCO’s RAPTOR® draper belts feed better than any auger, and we can always go a few extra hours.  One night, the people with augers in the field next to us had to quit earlier than us! Overall capacity is also better with drapers, and RAPTOR® never requires me to re-tension.”  Ultimately, adding more harvesting hours to the day, combined with the dependable technology of WCCO’s RAPTOR® draper belts, has been impactful to the success of Myers Farms.

As a USB member, Jay was privy to the development of the first technology launched under WCCO Belting’s TerraTech™ product line of belts made with sustainable materials, a patented rubber compound made with soybean oil. It’s not only a more environmentally friendly option but creates a new use for soy.  Jay was one of the first growers to use the technology in the field after testing was completed – and the belts are still on his machine. “Sourcing products manufactured with materials I’m responsible for harvesting is a great way for me to support my own business and the growth of the U.S. soybean industry.”

Jay, Cara, and Travis, thank you for putting your trust in WCCO Belting’s rubber products. We are thankful for producers, like you, who dedicate themselves to the agricultural industry in many ways. It was great to see the successful operation of Myers Farms, and we are proud our products can support your efforts to feed the world.