WCCO Workers: They Like to Live in America, Article in the Wahpeton Daily News 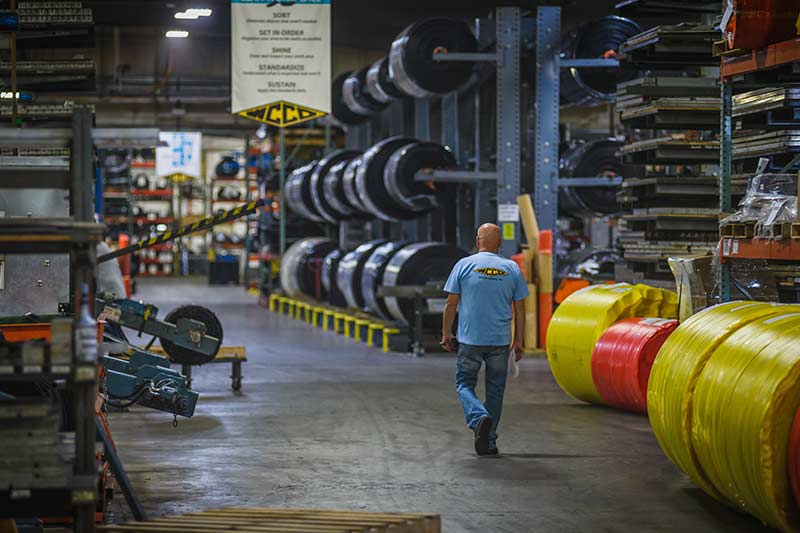 Oleksandr “Alex” Likhachova believes that if you’re not afraid of hard work or a job at hand, you can have a good future full of opportunities ahead of you in America.

Likhachova and his wife, Natalia, are first shift production employees at WCCO Belting, Inc. in Wahpeton. The couple, immigrants from Ukraine, are expecting their first child in February 2018. They already know it’s a boy.

“We’ve been in America for three years. We have work permits and hope to work our way up,” Likhachova explained.

Alex and Natalia Likhachova are part of a growing population of new Americans in the workforce. WCCO President and CEO Thomas Shorma noted that while it wasn’t the company’s intent to consciously create such a diverse employee pool, WCCO is reaping the benefits.

“We do business internationally in a lot of different countries,” Shorma said. “It’s a natural transition to accept a lot of people from different backgrounds. At the end of the day, it doesn’t matter where you’re from or what language you speak. It goes back to the sign at the door: ‘We’re always looking for great people,’ wherever your background might be.”

Julius Esmali has been with WCCO since 2009. Originally from the Philippines, Esmali has advanced to the position of second shift assistant supervisor.

“My job is on the floor. Before they run any product, I need to double check everything first,” Esmali explained.

Esmali supervises approximately 30-40 employees. For him, the best part of the job is working closely and helping co-workers.

“Some English words are hard to understand, but talking to the people on the floor helps me out,” Esmali continued. “I’ve also got my older sister and younger brother in law here.”

Currently, Esmali is considered a permanent U.S. resident, but not yet a full citizen. The application is completed, but it takes a long time to process.

For fun, the Esmali family takes vacations. Julius Esmali considers traveling the most satisfying part about being in America.

“We went to Mount Rushmore in South Dakota. I really liked that place. And we drove to Disneyland, to see all that it had,” Esmali continued.

Working situations like the Esmalis, with multiple family members at the same location, are a benefit to WCCO.

“Referrals are huge in obtaining new employees,” said Vice President of Operations Rod Koch, P.E. “We hired one lady from Tennessee and the next thing you know, we’ve got her family members from Tennessee. It’s great to bring in people from other states where there aren’t employment opportunities. Employee referrals are always our best choice because people know, “This is my cousin. I know they’re a hard worker.”

Furthermore, it’s not WCCO’s intent to pull employees from established Red River Valley employment, but rather from other states and counties.

Vineet Saxena is WCCO’s supply chair vice president. Hailing from Jaipur, Rajasthan, India, Saxena has been in the United States for 14 years.

Currently possessing a green card, Saxena can apply for full citizenship in 2019. In the meantime, he’s responsible for all raw materials in the belting process.

“Communication is important to me. Because of the different time zones, I have to work until late at night, or arrive in the early morning,” Saxena continued.

While Saxena works hard in his office, Operations Manager Dewey Miller faces the equally challenging task of figuring out which workers belong in which department. Prospective WCCO employees are given a 90-minute interview.

“It’s not just knowing someone’s name. It’s knowing their personality, where the best fit is and what department they’ll be the most comfortable it. After all, you’d want to work with someone like you,” Miller said.

Alex and Natalie Likhachova began working for WCCO in March 2017. While they don’t work side by side, they do still see each other on the production floor and during breaks and lunchtime. And, of course, they’re waiting for the day when she’ll give birth.

“It will be up to (my son) if he wants to work here. Maybe he will,” Alex Likhachova said.

That would be alright with Thomas Shorma, who’s proud but not self-congratulatory about the diversity in his business.

“It’s been less about us and more about letting something natural happen,” Shorma said. “On the other hand, it was exciting when we learned there was an employee who can speak 14 different languages. That’s pretty cool.”

To view the article visit: http://www.wahpetondailynews.com/