How WCCO Belting started on a shoestring

WCCO founder, Ed Shorma, was the son of immigrants and a farm boy who found himself on the world stage. He had a remarkable ability to establish a vision and work tirelessly to attain it. What was more impressive, however, was his way of inspiring other men and women with his drive and ambition so deeply that they, too, dedicated their lives in support of reaching the goals he set. This loyalty, combined with Ed’s dogged work ethic, helped him expand the family business into eight separate businesses and over one-thousand employees. This earned him the title of 1982 Small Business Person of the Year, a Small Business Administration award presented to him by President Ronald Reagan.

“Edward Shorma, a Korean War Veteran, mortgaged the family car and borrowed $1,500 in 1954 to buy a shoe repair shop in North Dakota. During his first year of operation, he grossed $5,400. Today, he has expanded it into a multi-million-dollar business providing jobs for hundreds of people.” President Ronald Reagan, 1982 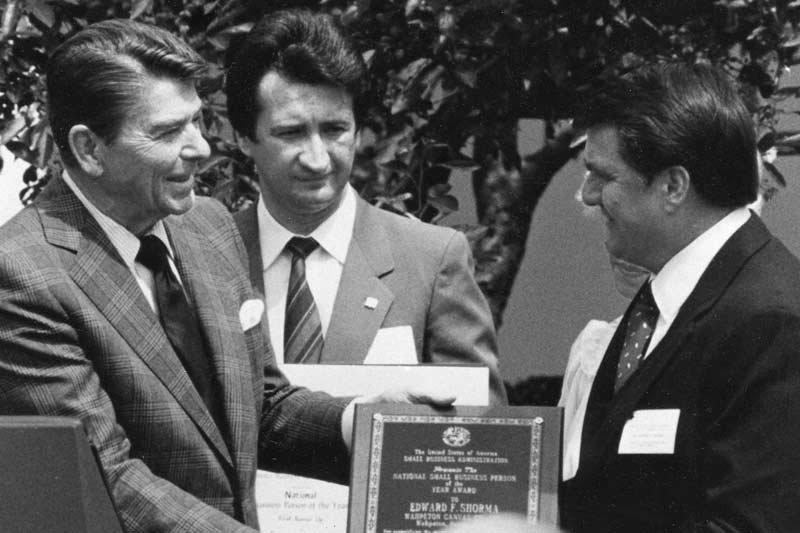 So how did a shoe cobbler get into rubber belting? Ed had a knack for seeing a need and figuring out a way to fill it – typically using unconventional measures. (A characteristic that is still very prevalent in WCCO’s culture today.) Ed started using his sewing skills to repair farm truck seats and tarps. He’d go on to win contracts for creating canvas belting alongside burgeoning farm equipment manufacturers which set the path for Wahpeton Canvas Company (WCCO). After a cotton shortage in the 1980s, WCCO repurposed heat-sealing equipment from the kitchen cabinet industry (another of one of the eight Shorma family ventures) into a rubber vulcanization press. From then till now, WCCO continues to engineer rubber products for a growing list of domestic and international equipment manufacturers and distributors.