"Beyond the Belt" with Kevin Klosterman, Tri-K Farms 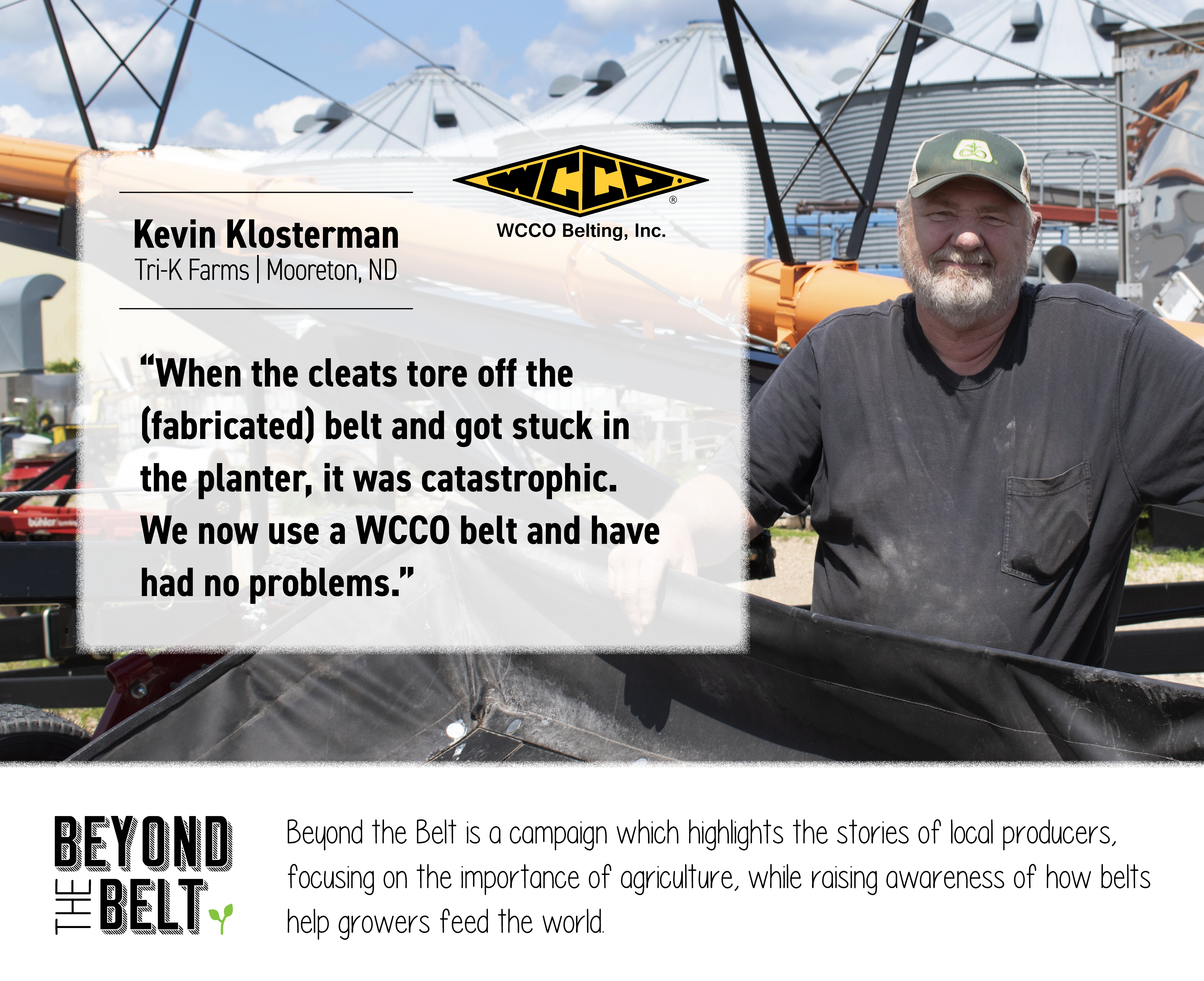 It was a sunny afternoon visiting Tri-K Farms in Mooreton, North Dakota, which is a small town about 13 miles west of the city of Wahpeton, home of WCCO Belting’s manufacturing facility.  Tri-K is short for the names of its operators – Kevin, Kelly, and Kody Klosterman. The fourth-generation family business with responsibility for over 4,000 acres raises corn along with soybeans for seed production.

Kevin Klosterman, our host, invited the WCCO team into Tri-K’s impressive shop to see the draper platform that was undergoing regular maintenance prior to the start of the harvest season.  After switching from traditional auger platforms to draper platforms around 2013, Kevin and his employees had positive comments about its performance in the field. In fact, the WCCO RAPTOR® drapers on one of the platforms already had over 600 hours in the field, and they weren’t looking to change it out anytime soon.  That’s because RAPTOR® is made with a patented fabric technology that makes it the most durable draper in the global market, and the gold standard worldwide.

After chatting about draper belts, Kevin took us over to see their belted tube conveyors.  A true believer in belting technology, Kevin said Tri-K Farms uses all belted tube conveyors to move materials, no augers, to ensure their crop is gently handled.  “You can tell the difference in quality between an auger and a belted conveyor.  We see less seed cracking, which is important when preserving germination. And because the seed company knows how gentle these belts handle, they pay a premium price for using belt in and belt out!”

Tri-K Farms also uses a seed tender for planting.  Today, it is fitted with a WCCO-made cleated tube conveyor belt.  However, the belt originally installed on the machine was fabricated and failed in the field, leading to significant issues impacting Tri-K’s productivity.  Fabricators use a premade belt and glue pre-made cleats on to the belt’s surface. The glue often fails under stress and the cleats tear off the belt, and in Tri-K’s case, clogged the tube and had them borrowing their neighbor’s equipment in the interim.  And so, we were happy to learn Kevin found success with WCCO’s cleated belting, and we used the opportunity to explain to him the difference between the two products.

There are belt manufacturers and belt fabricators.  A fabricator relies on glue, while WCCO Belting, a belt manufacturer, uses a proprietary process to vulcanize the belt and its surface features, such as cleats, in one step.  The result is a belt that has integrally molded cleats which eliminates cleat tearing during operation. Kevin experienced the before and after, and now recognizes that not all belts perform the same, “When the cleats tore off the (fabricated) belt and got stuck in the planter, it was catastrophic. We now use a WCCO belt and have had no problems.”

This was an educational visit for both parties.  The WCCO team listened to a firsthand account of how belt quality can make or break a farmer’s season, and Kevin and the Tri-K team learned a bit more about the rubber products manufactured just down the road that are not only sold to them, but farmers like them all over the world.

To Kevin, thank you for being a great host. WCCO Belting is glad to count you as a satisfied customer. Thank you for your dedication to agriculture and helping to feed the world. Good luck this season!